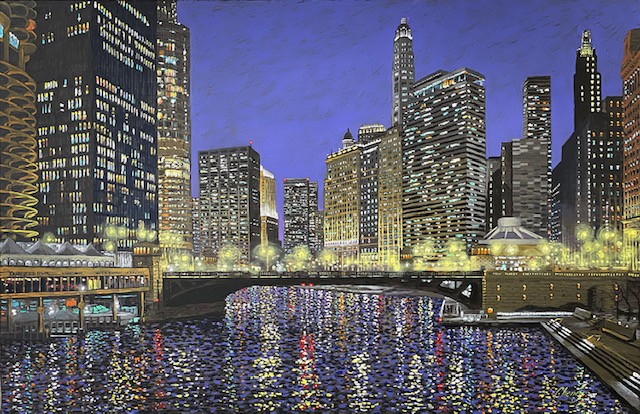 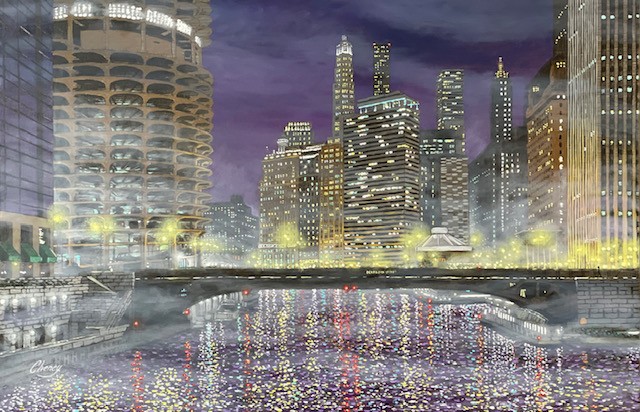 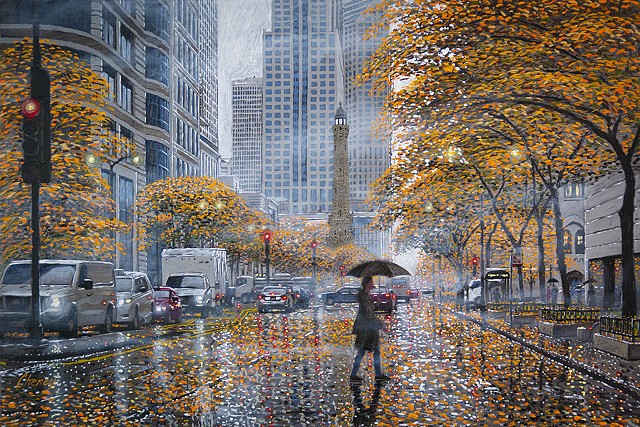 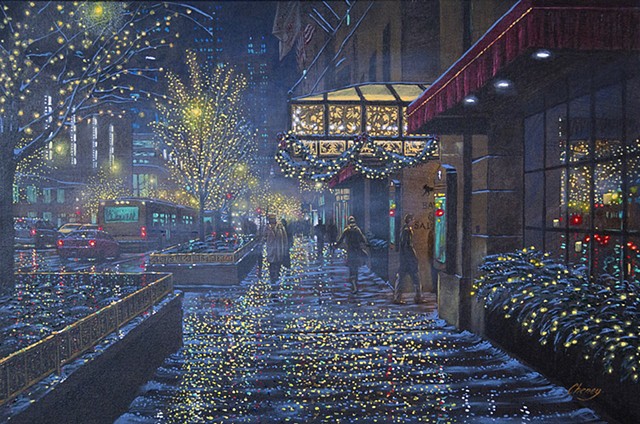 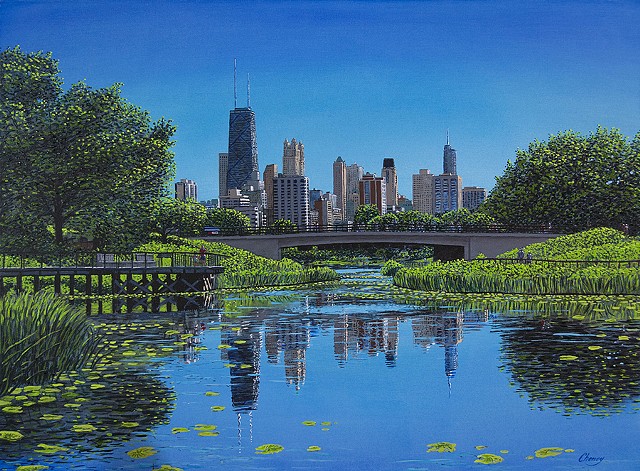 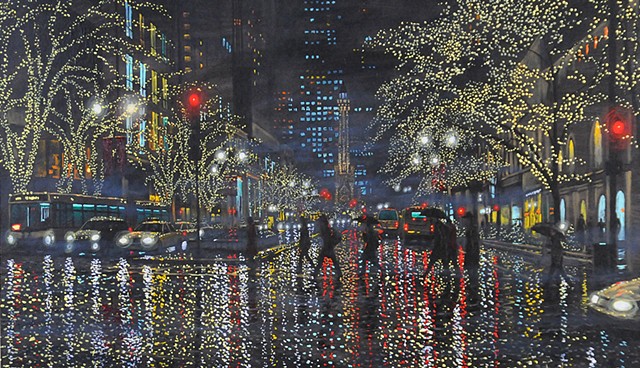 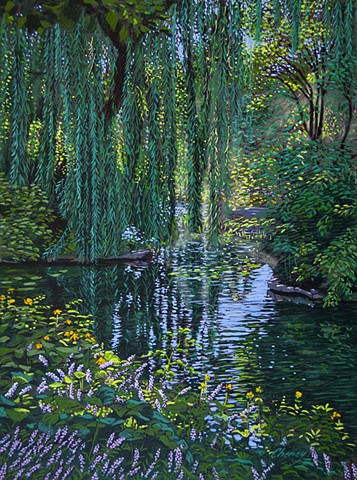 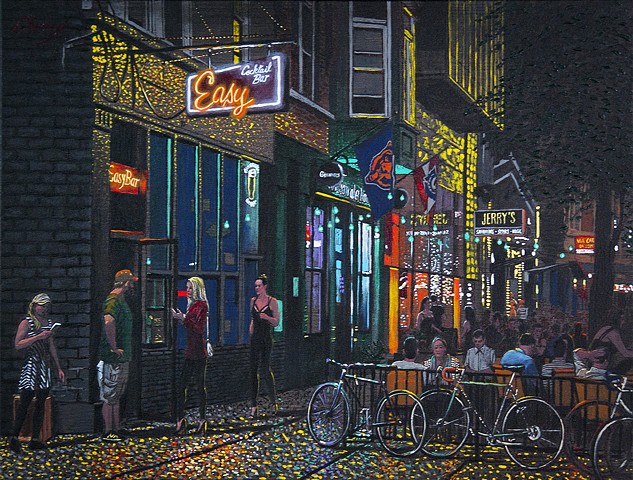 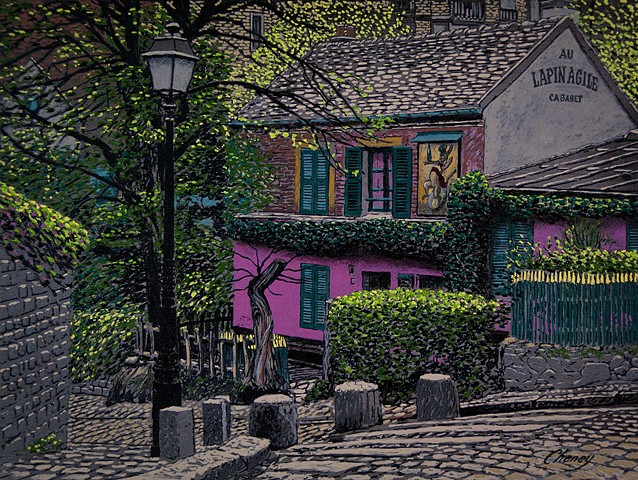 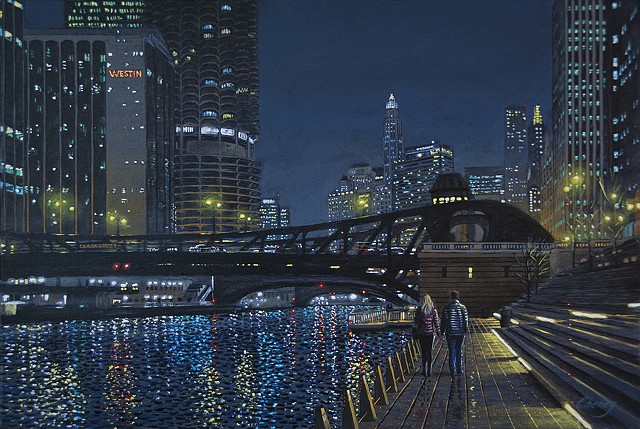 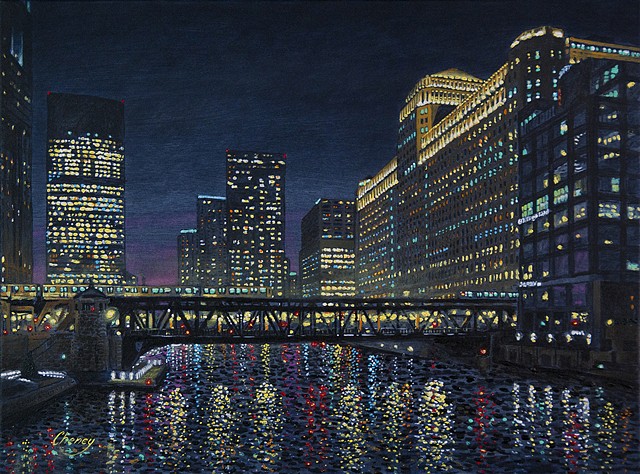 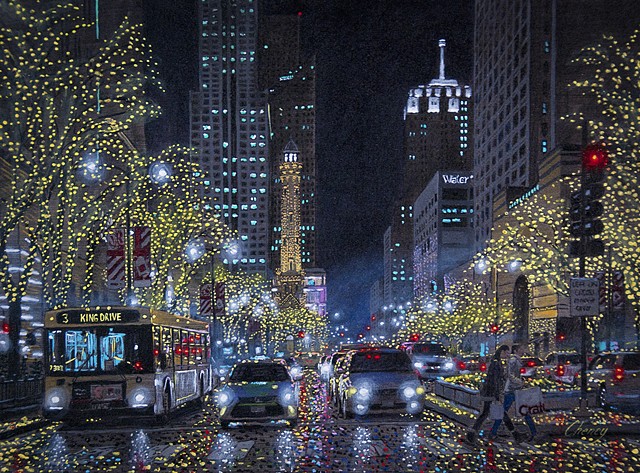 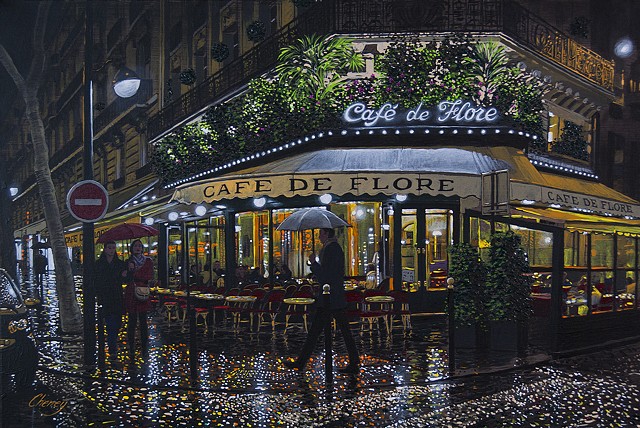 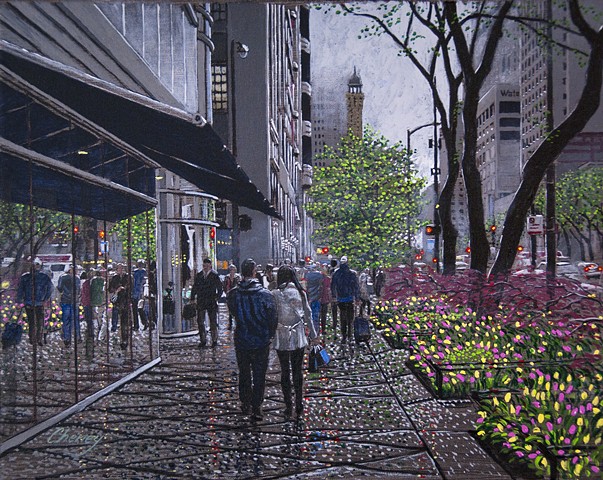 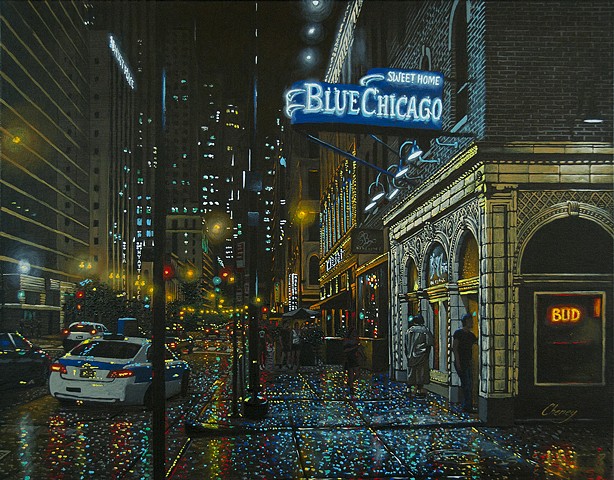 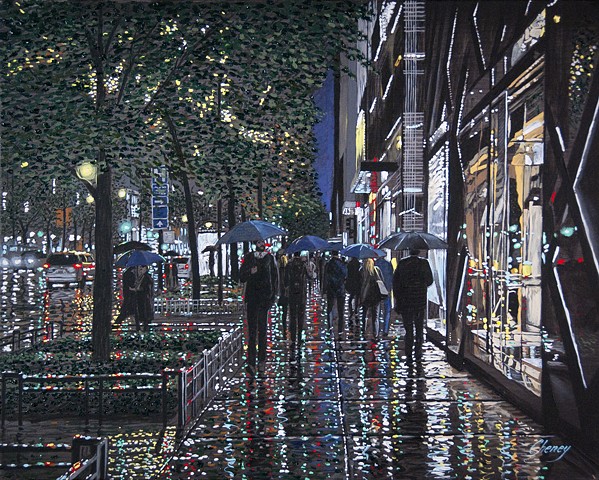 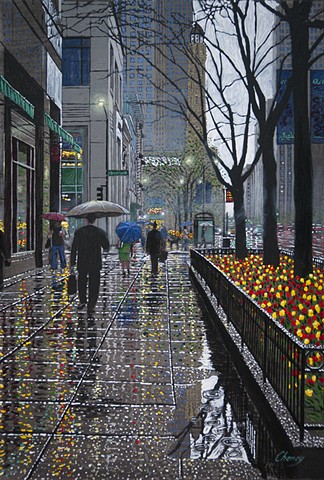 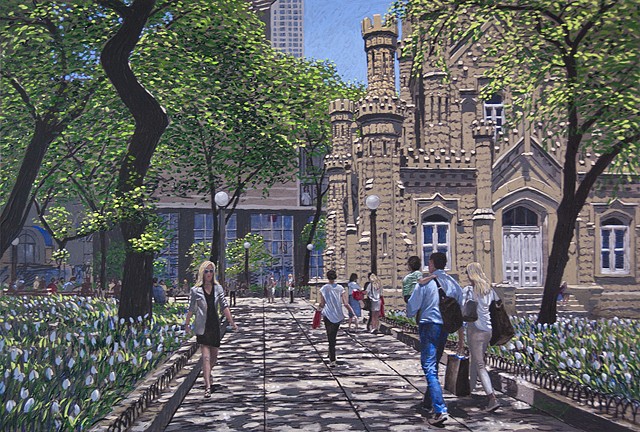 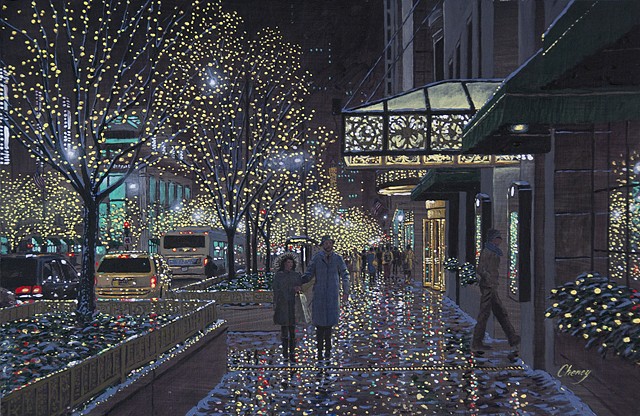 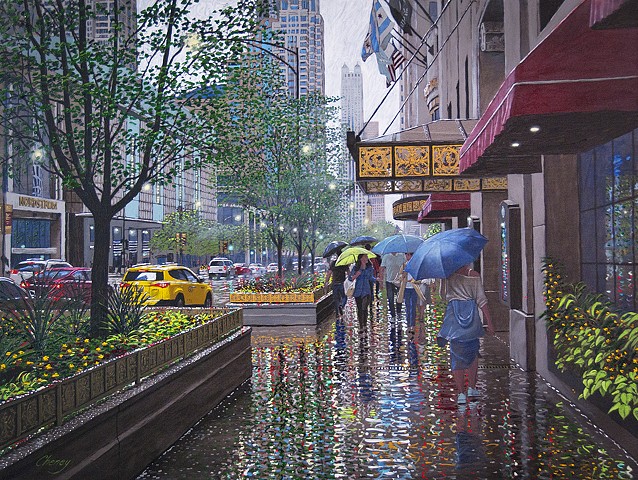 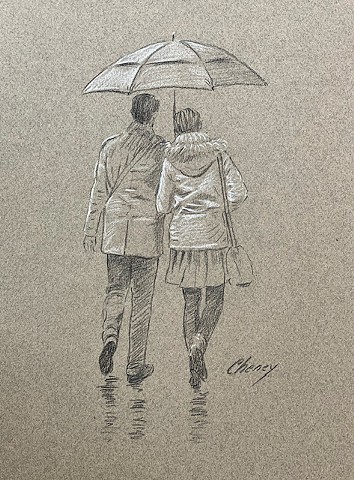 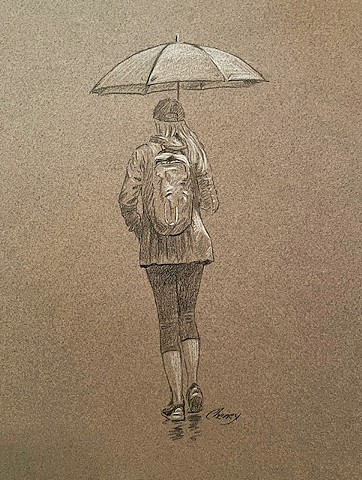 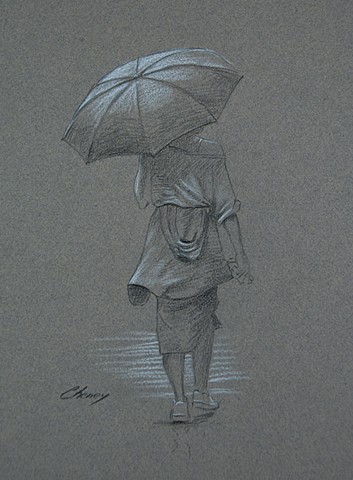 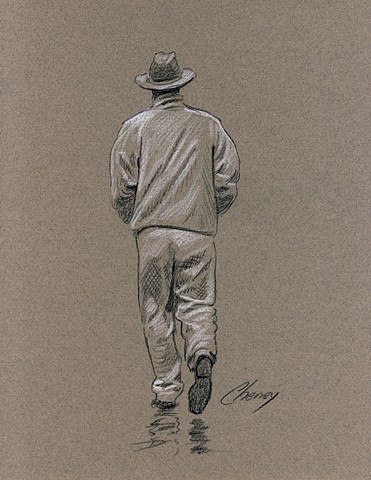 Michael Cheney Michael Cheney was born in Syracuse, New York. His father was an organic chemist who was on the team that won the Nobel Prize for discovering Vitamin K. Cheney was planning to becoming a scientist until eleventh grade when his art teacher, Mr. Gordon Muck, asked the class, “How many of you plan to become artists...except Michael, of course, we know he will.” Gordon Muck felt that Cheney's talent demanded that he become an artist. Cheney won the Bahouth Art Award (best artist in his high school), and went on to major in painting at Boston University. Boston University taught in the beaux-arts style, and Cheney would often draw from the figure over 30 hours a week. He had the honor of studying with Philip Guston, one of the original four Abstract Expressionists (the other three were William de Kooning, Jackson Pollock and Franz Kline). Guston taught Cheney to work with lively paint strokes and the importance of composition and color harmony. Guston's work in the 1950s was celebrated as among the greatest in American history, but by the 1970s (when Cheney was studying with him) the critics had turned on him and vehemently dismissed his new work. When Cheney asked him how he felt about that, Guston said, "My paintings have never changed, from my early Cubist work through my Abstract Expressionist work to paintings I'm doing today." He advised Cheney, "Don't listen to the critics, do what you love and what you believe in." Interestingly, those paintings from the 1970s are now Guston's most famous works; the Art Institute of Chicago has devoted an entire room to them in the new Modern Wing. During Cheney's senior year he saw an exhibition of Frank Gallo sculptures in Boston, which he felt captured the spirit of the contemporary times.

He came to the University of Illinois (with a full tuition scholarship) to do his graduate work under Gallo (one of the most celebrated sculptors in America at the time). His figure drawing skills translated very well into sculpture, and one of his sculptures was exhibited at the Art Institute of Chicago (Chicago and Vicinity Show, left). Cheney taught painting, drawing and color theory for two years at the University of Illinois in Champaign.

Over the next several years he was commissioned to create a bronze sculpture (portrait), which is located at Watkins Glen International in upstate New York, and exhibited in many juried national and international exhibitions including New Horizons, Maintsreams and the International Sculpture Conference. One of his paintings was purchased by the president of the Illinois Arts Council from a show at the Peoria Art Guild and he was commissioned to do numerous oil portraits.

In 1997 Cheney began work on "City", a major ongoing exhibition of paintings and drawings at Atlas Galleries in Chicago and Puerto Rico which were introduced in a one-person show in 1999.

In 2001 he exhibited in the "Sweet Home Chicago" International Urban Art exhibition, and he was appointed a commissioner with the Flossmoor Public Art Commission assembling a world-class collection of sculptures including Terry Karpowicz, Richard Hunt, Judith Shea and Bruce Beasley. In 2002 he began exhibiting at the Art Expo in New York, and in 2003, 2007 and 2010 he was selected to be the featured artist at Atlas Galleries at 535 North Michigan Avenue for "Chicago Artists Month.”

In 2004 Cheney was honored with a one-person show at the Four Seasons Hotel for the city-wide "Embrace Art in Chicago" event, and in 2005 he shared a two-person show with Frederick Phillips at the Christopher Art gallery at Prarie State College in Illinois.

On September 25, 2009 Michael Cheney's 10 year anniversary was celebrated with a major one-person retrospective exhibition at the 535 North Michigan Avenue gallery, including over 25 new paintings, drawings and prints. His work is in public and private collections across the U.S., Great Britain, Japan, Singapore and Europe as well as the collections of many prominent Chicagoans including Oprah Winfrey, Vince Vaughn, the late Paul Harvey, WGN’s Rich King, the Goodman family (the Goodman Theater), Stanley Kusper (former clerk of Cook County), the Berghoff family, and the Johnson family.

In 2011, Choose Chicago, Chicago’s convention and tourism bureau named Cheney Chicago’s Artist of the Year. Rose Horcher, Managing Director of the bureau, presented Michael Cheney this award on September 24, 2010. Several pieces of Cheney’s original artwork are being presented to the bureau’s top clients by the senior staff on behalf of Choose Chicago and the City of Chicago.